To commemorate the 70th anniversary of the end of World War II, in a ceremony in Monterey Park, California on January 15, 2015, officials and delegates from the People’s Republic of China as well as many veterans and descendants of veterans dedicated a memorial to the millions of  Chinese and Americans who lost their lives in the devastating conflict.

The memorial is on the grounds of the City Hall in Monterey Park, the home of a significant number of Chinese-Americans.  Participants in the ceremony included Chinese delegations from Kunming, the home base of the Flying Tigers, and Nanjing, many state and local officials,  Charlene Fontaine of the Flying Tigers 69th DRS Association, Pedro Chan, a great supporter of the Flying Tigers,  General Chennault’s nephew, and Sun Yat-sen’s great-grandson.  Many veterans were in attendance and, along with Bill Finkelstein and Steve Sobel, 69th DRS cubs, were recognized and honored.

Many of the talks focused on the pivotal role of the Flying Tigers in fighting alongside the Chinese to forestall the Japanese aggression  in China.  The Chinese were also recognized for rescuing and harboring downed American pilots.  Especially moving was a talk by a veteran who survived a Japanese prisoner-of-war camp along with Louis Zamperini, whose exploits were chronicled in the book and movie “Unbroken.” 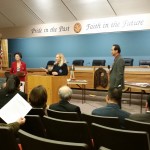 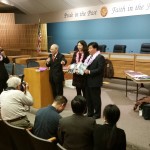 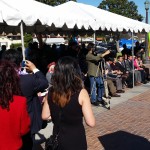 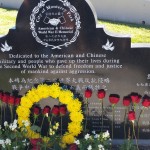 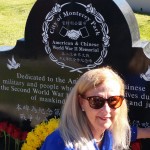