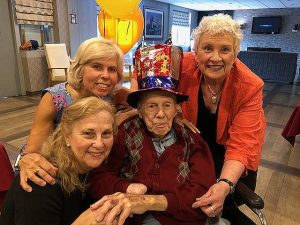 Whiting – William J. Laun, 107, of Whiting, passed away Monday, August 6, 2018 at ArtistaCare at Whiting. Born in Manhattan, NY, he lived in Valley Stream, Long Island, NY before moving to Whiting in 1979. William was a lithographic pressman for Peter Mallon Printing Co. in Long Island City, NY for 41 years, retiring in 1974. He was a U.S. Army veteran of World War II and a member of the Flying Tigers serving in China. He was a member of the Whiting United Methodist Church.

William was predeceased by his wife, Esther Laun in 2005 and his brother, George Laun, Jr. He is survived by his cousin, Claudia Celmer; Niece, Christine Laudorn and several other nieces and nephews.